It’s been a homecoming celebration since 1940 and this year, the St. Gregory’s Catholic Church annual Labor Day dinner is back.

St. Gregory’s festival will be Sept. 5, at the church in Macdonaldton. Family-style ham and turkey dinners with noodles and stuffing will be served from 11 a.m. to 2 p.m. The day features games, a bake sale, themed baskets and refreshments.

St. Gregory’s church opened in the early 1900s. The Donaldton Land Co. sold a parcel of land in Macdonaldton on Oct. 15, 1906, to Joseph Gutt who then sold it on Aug. 28, 1917, to Andy Govalla, John Hochstetler and Joseph Gutt, trustees, of the United Mine Workers of America, Local No. 3163. The union erected a structure as its meeting and social facility.

“It originally started out as a Greek Catholic and Roman Catholic church,” said Tom Smith from St. Gregory’s Catholic Church. “There was a large thriving community mostly of immigrants. The church served both foundations for many years and alternated Sundays for each — one Sunday it was the Greek Catholic service, the next the Roman.”

When both the shaft and slope mines closed, the mining families were forced to move. During the appointment of the Rev. Joseph D. Tomko as pastor St. Gregory, June 1940-42, the parish began sponsoring the Labor Day function, serving as both a homecoming event and as a way to raise funds for the parish.

Smith said when the mines shut down, the church started the picnic as a homecoming festival for the families that left the area.

“A lot of families moved into Michigan, Ohio and New York. They would come back on the weekends of the picnic and camp out with families who were still here,” Smith said.

James Mark of Dubois, and John Ghizzoni of Homer City, trustees for the International United Mine Workers of America, sold the property on. Feb. 7, 1946, to Samuel J. Farber, Berlin, and John Good of Macdonaldton. The two sponsored dances and allowed St. Gregory Catholic Church to use of the building for parish functions. On Feb. 22, 1951, Samuel J. and Nora Farber of Meyersdale, and John and Mary Good of Macdonaldton, sold the property to the Most Rev. Richard T. Guilfoyle, Bishop of the Altoona Diocese of the Roman Catholic Church, in trust for St. Gregory Church.

Originally the picnics were two or three-day affairs with the Italian community preparing a Sunday spaghetti dinner and the Slovaks preparing a chicken dinner on Monday. They struggled in a very small kitchen without running water. The water was carried from the Trulick residence next door and heated on a stove.

Everything was prepared from scratch. Donations were made from parishioners’ gardens such as tomatoes, cucumbers, peppers, potatoes and the flowers that decorated the tables.

Each picnic required a chairlady who was in charge of organizing the dinner inside the hall and preparing the food. There was also a chairman who was responsible for the over-all management of the event, outdoor activities, the beer stand and getting a band for the evening dance.

Through the years some of the outdoor games included: penny pitch, milk bottle game, fish pond, bingo, chuck-a-luck, horseshoes, chances on stuffed animals and usually a poker game, also know as “the game in the woods.” In earlier years, someone might bring their accordion or fiddle to provide some music through the afternoon with many of the picnic-goers singing along.

As the picnic evolved, various changes were made including providing homemade noodles for the dinner. A few weeks before the dinner, the ladies of the parish would gather at the hall, bringing eggs, flour, bowls for mixing and eventually noodle machines. The noodle-making process continues today. The homemade noodles are always a highlight of the dinner.

Many families who left the coal region returned to the picnic through the years.

“We talk about friendships today, but we’re so occupied, so busy with daily life that we lose contact,” Smith said. “All that these coal mining people went through — they had to pay in script which the town didn’t honor so they had to use the company store owned by the coal company, and company housing owned by the coal company. During coal strikes they were thrown out of the houses and lived in tents. They became tent cities. Most of them didn’t speak English.

“Through all these struggles, they built friendships on necessity. They’re all in this together. Their friendships never ceased. They made truly lasting friendships.”

The hall has been remodeled and enlarged through the years, providing the workers with a spacious kitchen and dining area. For several years, bingo was held every Saturday evening.

“The picnic was a homecoming, a fun time,” Smith said. “As the original members started passing on, the tone of the picnic became more of a dinner. It’s not a long weekend anymore, but it’s still a homecoming.”

Smith said St. Gregory’s church still has original families from the coal mining community involved. They’ve made the picnic a large fundraiser for the church.

“We’ve had declining membership like most churches because of COVID,” Smith said. “We’re facing the same struggles as every other church. The picnic is important to sustain the church financially. The committee enjoys planning and working with each other for the picnic. It’s a good time to catch up with each other’s families and our lives.”

Step Inside a Fresh, Modern Family Retreat on the Shores of Lake Kiowa

Wed Sep 1 , 2021
Designer Rachel Buxkamper’s interest in interiors blossomed during her 20 years at The Neiman Marcus Group, where she held roles like VP of Merchandising for the company’s Home division. Buxkamper eventually took a sabbatical before working with local nonprofit Dwell with Dignity, followed by a stint with lauded designer Jan […] 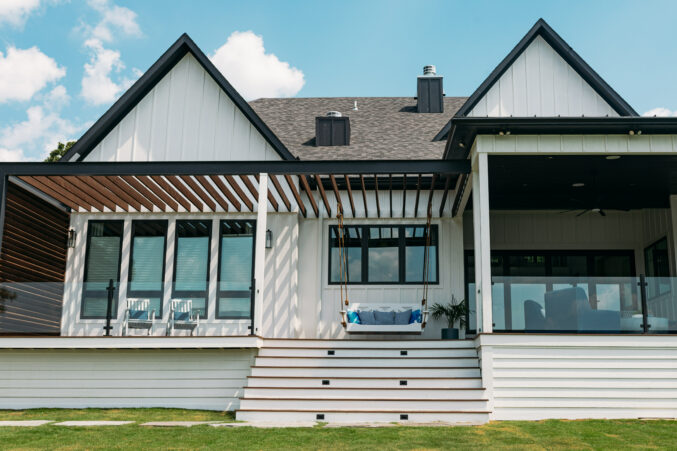