Mayor Lori Lightfoot took time out last weekend for the perfect place to cool off from the city heat: officiating at the wedding of Chris Kennedy, grandson of the late, great Robert F. Kennedy, and his bride, Erin Daigle, at the legendary Kennedy family compound in Hyannis Port, Massachusetts.

“Chris and Erin were supposed to get married last July 24 … but COVID shut that down,” said the very proud father of the groom, former Illinois gubernatorial candidate Chris Kennedy, who raised his branch of the Kennedy clan on Chicago’s North Shore, where his wife, Sheila, grew up.

Lightfoot and the groom connected during his father’s race in 2018, before she became mayor, and has become a close family friend of the Kennedys.

“They met during my campaign and became kindred spirits,” Kennedy said.

“By the way, my son Chris and the mayor both have this in common: They like to fight above their weight; have a deep sense of social justice; and have never met anyone they are afraid of!”

This is actually the second time the mayor, a lawyer, was the officiant at the couple’s nuptials.

Last weekend’s ceremony “gave the mayor the opportunity to marry them twice, the first time last December at City Hall,” Kennedy chuckled. The couple had put off a family-style wedding until it was pandemic safe to travel.

Quoth the proud father about the new branch of his family tree:

“Chris met his Erin at Middlebury College in Vermont, which has the highest marriage rate of people who meet each other while at the college they attend.”

“The couple met via Erin’s sister, who was on the ski team at Middlebury, and it was love at first sight. Of course, he raced against Erin on a ski run named after my father and lost.”

“And my father met my mother, Ethel, while skiing in Canada, where she lived, and turned out to be a better skier than my dad.”

“So the upshot of this love story is what my dad used to say: If you can’t beat ’em, marry ’em!”

“And you can bet a Kennedy wedding is always a family affair!

“At least 135 people out of the 300 in attendance were members of the family. Everybody in the family pulls together at a wedding,” he said, adding this historic footnote.

“Chris and Erin’s wedding party photo was taken in front of the “Brambletyde House,” which was once the summer White House” for U.S. President Jack Kennedy and wife Jackie.

On the political side, Sneed is told several Kennedy family members preparing for U.S. ambassadorships in the Biden administration (Vicki Kennedy to Austria and Caroline Kennedy to Australia) were there — as well as celeb Kennedy wives like actress Cheryl “Curb Your Enthusiasm” Hines, who was the TV wife of actor Larry David and is married to Robert F. Kennedy Jr.

Finally, our chat ended with a vignette about wedding attendee/actor/producer Keegan-Michael Key, who once lived in Chicago while acting at The Second City and has family in McHenry County.

“He can imitate an accent from anyone who is anywhere in Illinois,” said Kennedy. “It’s hysterical and amazing.”

The meaning of mensch: A special 70th birthday shoutout to Dia Weil, a remarkable woman and quiet humanitarian — who was honored last week at a backyard fete hosted by her beloved sidekick and Chicago arts stellar Anne Kaplan; a salute to Dia’s under the public radar giving, mentoring, and careful wisdom to those behind the scenes who make Chicago tick … but don’t expect a headline.

And a reason everyone should have a Dia in their life.

Former Chicago venture capitalist Edward W. Elliott Jr., the husband of my late best friend Betty, died this past week at the age of 77. Knowing him was incredible; to those who didn’t have the chance to meet him, you missed a lot. … Congrats to legendary West Side Chicago Fire Department Battalion Chief Mike Burns on his retirement after 40 years of keeping us safe. Now he and wife, Kitty, who retired last year after 31 years with the CFD, can go through city service withdrawal together. Blessings! . . . . Ditto congrats to uber business guru Cherryl T. Thomas on becoming new chair of the Chicago Zoological Society Board of Trustees, which manages Brookfield Zoo. . . . Saturday birthdays: Mark Cuban, 63; Wesley Snipes, 59; Zac Brown, 43. . . . Sunday birthdays: Jason Momoa, 42; Coolio, 58; and Adam Jones, 36.

Mon Aug 2 , 2021
Photo: Clockwise from Top Left: Courtesy of Friedman Benda; Nicholas Knight; Diana Budds; Lucie Rebeyrol Every couple of weeks, I’ll round up and share the objects, designers, news, and events I’m excited about. Photo: Courtesy of Friedman Benda For her first solo show, Carmen D’Apollonio, a self-taught ceramic artist based in […] 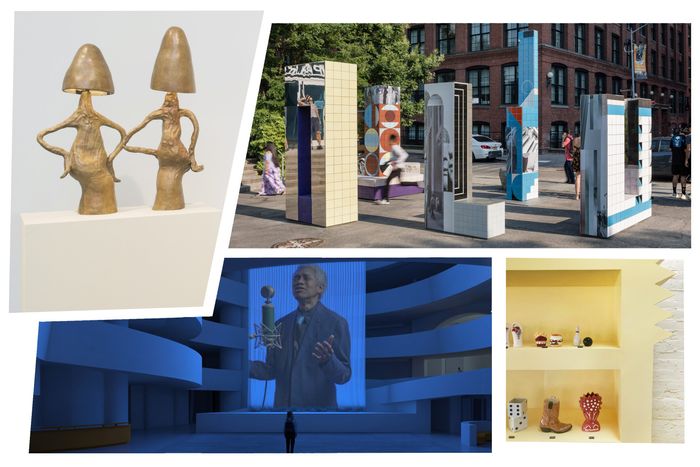