1865 – In September the Southern Treaty Commission, headed by Dennis N. Cooley, Commissioner of Indian Affairs, met with delegates of the Five Civilized Tribes as well as other tribes. At the meeting, Cooley informed the Tribes that by joining the Confederacy their previous treaties were null and void, and that new treaties had to be negotiated.

100 YEARS AGO – The following announcement was published in the Shawnee Morning News on September 21, 1921, describing the local KKK. “WE ARE ONE THOUSAND STRONG IN SHAWNEE. GOOD AMERICANS UPHOLD THE LAW. BAD CITIZENS MUST UPHOLD THE LAW. WATCH THE OWNERSHIP OF YOUR PAPER AND KEEP IT IN THE HANDS OF GOOD AMERICANS. WE WILL CLEAN SHAWNEE WHEN THE TIME IS RIPE. GAMBLERS, PIMPS, BOOTLEGGERS, HARLOTS, WILL SAVE DOUBLE BY LEAVING NOW.”

75 YEARS AGO – Bison Hill was swarming with education-hungry youth Monday, September 15, 1946, as the opening day of enrollment proved that even the most optimistic expectations were too modest, and that Oklahoma Baptist University would have more than 1,000 students, by far the largest in history.

50 YEARS AGO – Shawnee’s mayor, Pierre Taron, was appointed to serve on the Committee on Municipal Government and Administration of the National League of Cities.

Taron’s appointment came following the recommendation of the State of Oklahoma’s Municipal League. He would be a member of a three-member delegation from Oklahoma that would represent the state’s municipal interests on the committee.

The Shawnee mayor, who was serving his 10th year as a Ward 6 city commissioner and six and one-half years of that as the city’s mayor, was a member of the policy committee delegation from Oklahoma.

25 YEARS AGO – Taking a recommendation from the grand jury, Governor Frank Keating named Kay Christiansen as the new district attorney for Pottawatomie and Lincoln counties on Monday, September 9, 1996.

Christiansen, 57, replaced Miles Zimmerman, who resigned August 27. She was set to serve Zimmerman’s final two years. “Kay Christiansen is an experienced professional who has served as an assistant district attorney for District 23 for the past six years,” Keating said. “She is a former public school teacher who was highly recommended by the grand jury overseeing the district attorney’s office.”

10 YEARS AGO – Three juries returned verdicts in Pottawatomie County trials Tuesday, September 13, including a jury that convicted a Tecumseh man and recommended life in prison on charges relating to a Mexican methamphetamine ring. A jury also returned a guilty verdict in a felony assault case, while three family members standing trial on misdemeanors charges for an incident at Wes Watkins Reservoir were all acquitted.

–During the Tuesday, September 20, 2011, Pottawatomie County Board of County Commissioners meeting, the board accepted the resignation of District 3 Commissioner Buck Day, effective October 1.

Day, who said “This is no secret,” said there’s been talk of him considering retirement, and he’s decided to go forward. He had yet to officially write a resignation letter to Governor Mary Fallin, he said, but would do that during the week. Day said it would be up to the governor when to call a special election to fill his term, but commissioners could appoint an interim in the meantime and would discuss that matter further the following week. Day had served as commissioner for 25 years.

FIVE YEARS AGO – The dynamics of the Shawnee City Board of Commissioners changed drastically, due to the recent elections. After the swearing in ceremonies on September 6, the new-comers took their posts. A couple of them got a head start when they were sworn in earlier, due to vacancies on the board.

Right after the June 28 election, Ward 2 Commissioner Linda Agee resigned, leaving the seat open for Ron Gillham Sr., who was sworn in at the July 18 meeting. Soon after, Dub Bushong took his place on the board, filling the Ward 1 post that was empty since Gary Vogel resigned in April of 2015.

ONE YEAR AGO – Pottawatomie County commissioners voted in an emergency meeting Tuesday, September 15, 2020, to close the county courthouse until Monday, September 28 due to COVID-19 exposure. According to District 2 Commissioner Randy Thomas, after four courthouse non-employees tested positive for COVID-19, the decision was made.

–The downtown Shawnee landmark, the Hornbeck Theatre, located at 125 north Bell, ceased operation at the close of business Tuesday, September 29, 2020. The announcement was made by owner/ operators Jones Theatres, Inc. and AMC Theatres.

These stories appear throughout the six volumes of “Redbud City,” the history of Shawnee. The weekly articles in the News-Star are excerpts from those editions. All six volumes, from 1830 to June of 2021, are now available for purchase at the Pottawatomie County Historical Society. They are now open, and you may visit them, or you may order them online at their website, or by calling (405) 275-8412. Each volume is $35, but a purchase of two or more volumes can be obtained at $30 each. We are offering a special deal. If you purchase any other volume, you may obtain Volume One (1830-1929) for just $20. The six volumes contain approximately three million words and more than 1,000 pictures. Each volume is indexed with people and businesses, making it easy to find a person or entity.

Sat Sep 11 , 2021
Anice Hoachlander Surrounded by iconic Northwest Washington, D.C., landmarks, including the Washington Cathedral, the Naval Observatory, and Embassy Row, the 30th Street House is located on a roughly 1-acre corner lot in Massachusetts Avenue Heights, a small, tree-lined neighborhood with generously sized, traditional homes. To continue the rhythm of the […] 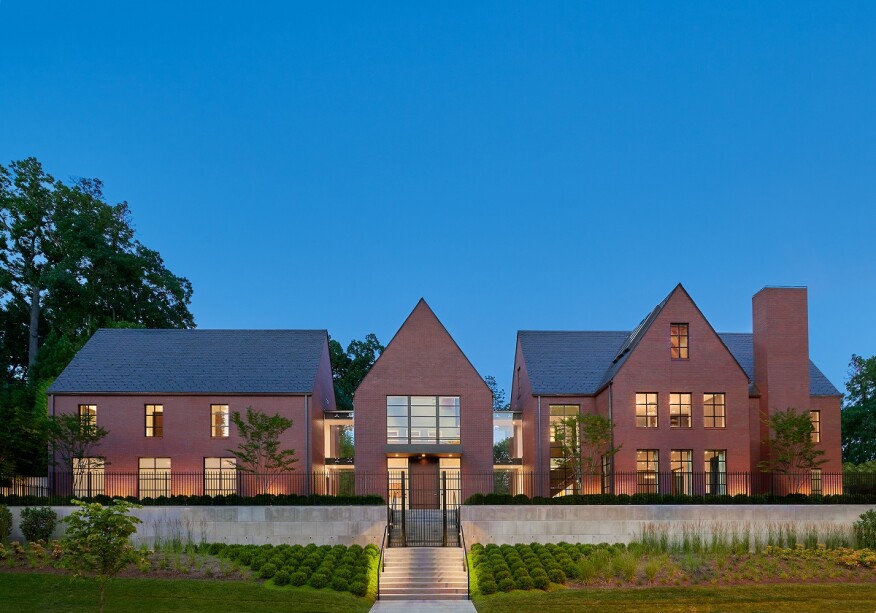